Buttonhole bars have been used for centuries within the various European cutwork traditions: Renaissance work (dating from the 15th century, gaining popularity with royalty and nobility in the 16th and 17th centuries); Reticella dating from the 16th century onwards which was popular for decorating Elizabethan ruffs and more recently Baldyring embroidery, a 19th century Danish development of Reticella (part of the Hedebo tradition).

Consider whether you need buttonhole bars for support, and if they will add to the look of your design.
Buttonhole bars should be stitched before you undertake any cutting.

Bring the needle up on the right, just outside the double running stitch, and down on the left. Make two more stitches: left to right, then right to left. The three threads across the gap should be taut, even a little too tight.

Bring the needle up on the left and begin to work buttonhole stitch across the three long stitches. Pass the needle eye-first under the threads from top to bottom, leaving a loop and then pass the needle through the loop.

Pull the thread tight to complete the stitch.

Repeat steps 2 and 3 across the bar, keeping the stitches close together and with an even tension. To finish the bar take the needle down outside the running stitch line.

Repeat buttonhole stitch around the edges of the square, this time stitching through the fabric.

The finished sample of buttonhole bars.

Buttonhole bars allow you to cut away larger shapes by creating a network of supports. 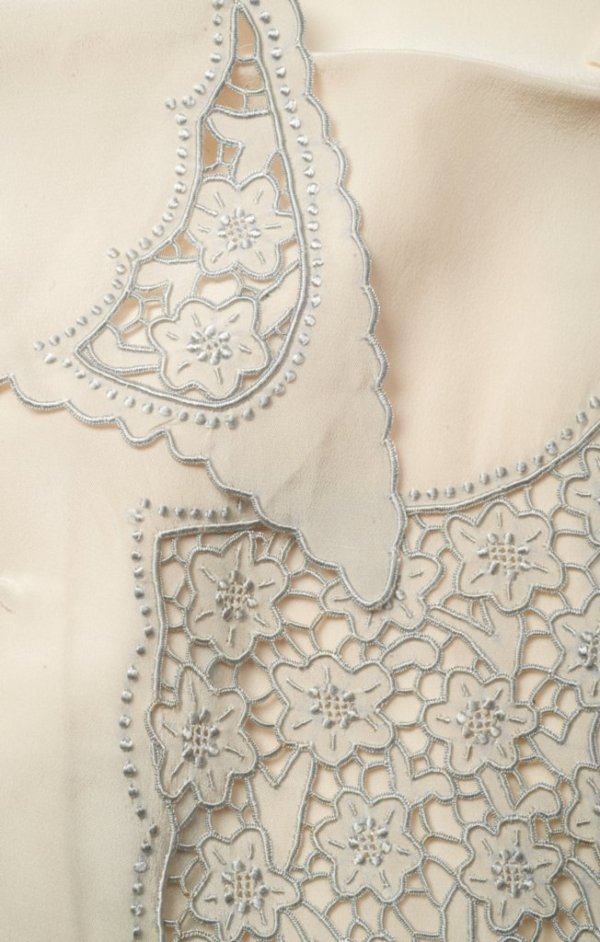