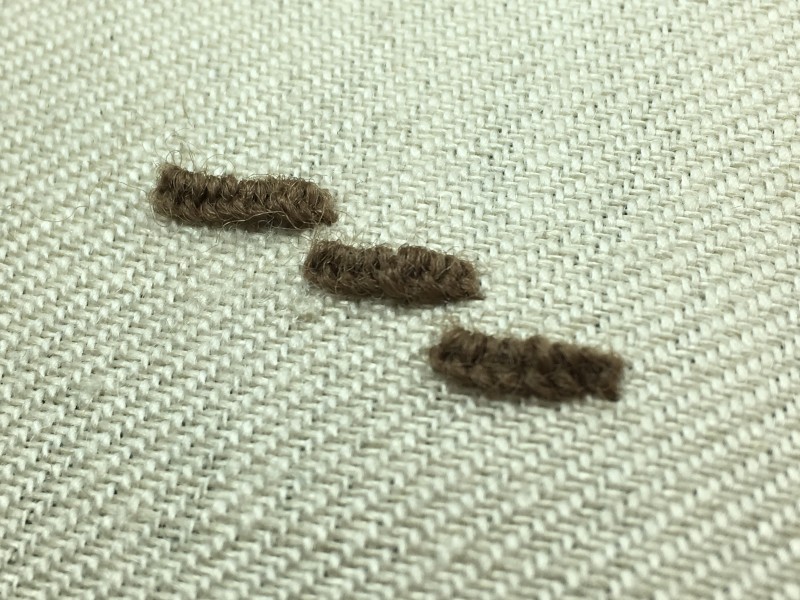 ​Buttonhole bars are a bar (long stitch) covered in buttonhole stitches.  They can be attached to the fabric securely at both ends (described below) or detached at one end to produce a stitch with movement and flexibility (see the entry for detached buttonhole bars).

Outside of cutwork, the use of buttonhole bars is not well-documented.  There is an example on a Mandarin square from China during the late Ching era (late 19th/early 20th century) where the stitch was used to form the legs of a pheasant, but this is a lone recorded instance.

The first straight stitch will be the core of the bar. Increase the number of the core stitch if needed.

Make a straight stitch, which will be the length of the finished buttonhole bar. Bring the needle up to the front of the fabric just next to the beginning of the bar.

Form a loop and push the eye-end of the needle under the bar, taking the needle over the loop thread to make a buttonhole stitch.

Pull the thread and tighten the buttonhole stitch at the start of the bar and form the next stitch in the same way. You could change the needle to a tapestry needle to use the tip of the needle instead of the eye of the needle.

Continue down the bar, making the buttonhole stitches as even as possible. Hold the thread taut in your left hand as you form each stitch to maintain the shape of the preceding one.

At the end of the bar, take the needle through to the back of the fabric and cast off.

Attached buttonhole bar stitch can be identified by a number of buttonhole stitches looped onto a length of thread attached at the top and bottom of the bar, so that the buttonholes sit over the base fabric but are not attached to it.